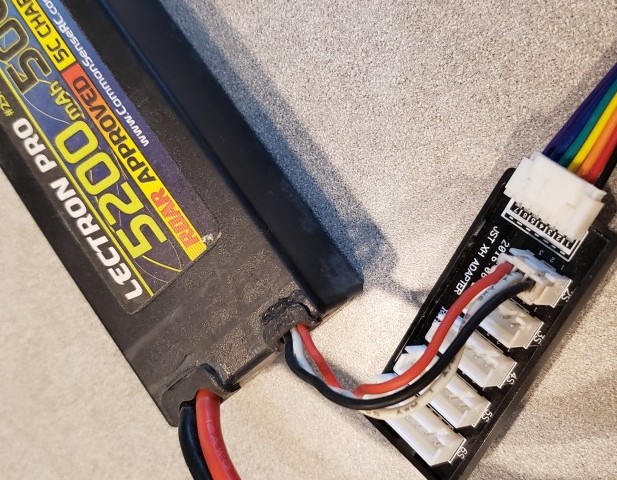 When deciding to run a lipo battery, It’s important to properly maintain and care for your LiPo’s. For LiPo Battery Charging, You Need to use a charger that is compatible with LiPos. LiPo batteries require special care. They charge using a system called Constant Current / Constant Voltage or CC/CV charging.

When charging NiMH and NiCd batteries, They charge best using a pulse charging method. Charging a LiPo battery in this way can have damaging effects, so it’s important to have a LiPo-compatible charger, Such as a Multi-Chemistry Charger.

The second reason that you need a LiPo-compatible charger is LiPo cell balancing. Balancing is a term we use to describe the equalizing of the voltage of each cell in a LiPo battery pack.

We balance LiPo batteries to ensure each cell discharges and charges the same amount. This helps with the performance of the battery. Balancing is also a great way to tell if a cell is faulty. It is also crucial for safety reasons.

While there are stand-alone balancers on the market, I recommend purchasing a charger with built-in balancing capabilities, using a balance board. This makes the process of balancing easy and helps keep cost down by requiring one less item to purchase.

With the price of chargers with built-in balancers coming down to very reasonable prices, I can’t think of a reason you would not want to make it easier to charge your batteries.

Most LiPo batteries need to be charged rather slowly, compared to NiMH or NiCd batteries. While we would routinely charge a 3000mAh NiMH battery at four or five amps, a LiPo battery of the same capacity should be charged at no more than three amps.

Just like as the C Rating of a battery determines what the safe continuous discharge of the battery is, there is a C Rating for charging as well. For the majority of LiPos, the Charge Rate is 1C. 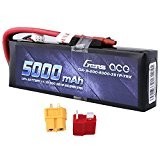 The safest charge rate for most LiPo batteries is 1C or 1 x capacity of a battery in Amps.

However, more and more LiPo batteries are coming out these days that advertise faster-charging capabilities, like the example battery we had above. On the battery, the label says it has a “3C Charge Rate”. Given that the battery’s capacity is 5000mAh or 5 Amps, that means the battery can be safely charged at a maximum of 15 Amps! While it’s best to default at a 1C charge rate, always defer to the battery’s labeling itself to determine the maximum safe charge rate.

Most LiPo batteries come with a connector called a JST-XH connector on the balance tap. One of the main problems with this connector is it’s really small and does not have a good grip area. This makes it hard to unplug from a balance board due to lack of grip on the connector, and a user usually just ends up pulling on the wires. This can break the connector, or wires and potentially short out the battery.

Due to the potential for fire when using LiPo batteries, regardless of the likelihood, certain precautions should be taken. Always have a fire extinguisher nearby, Even though it won’t put out a LiPo fire. LiPo fires are chemical reactions and are very hard to put out. But a fire extinguisher will contain the fire and stop it from spreading.

Another safety precaution is to charge the LiPo in a fire-resistant container. Most people opt toward the LiPo Bags that are on the market today. They are a bit pricey but are more portable than other solutions. I like to use a steel fire-proof safe, That way I can close the lid and get it outside should something happen. 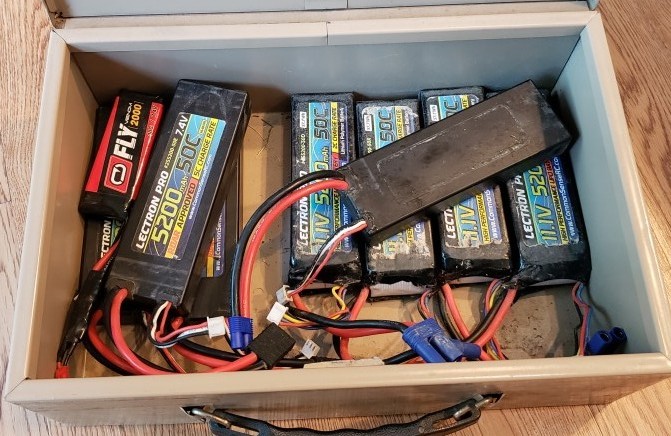 Finally, never charge your LiPo batteries unattended! If something does happen, you need to be around to react quickly. While you don’t have to always be in the same room, you shouldn’t leave the house, or do anything else that will prevent you from being able to take action should the battery catch fire.

When it comes to LiPo battery chargers, I consider the Venom 2-4 AC/DC LiPo Balance Charger to be one of the best values on the market. It is a multi-chemistry charger, which means it can charge LiPo, LiFe, Li-ion batteries. It can even charge the newest LiFe batteries that some use for receiver packs in airplanes and cars.

It has a built-in balancer that handles up to 4S LiPo batteries and can charge up to 3.0 amps. It’s a great charger for the price. It’s not as high-power as some LiPo users may need, though, since it only operates at 40 watts. So higher cell count batteries will not charge very fast on the Venom 2-4 AC/DC balance charger. 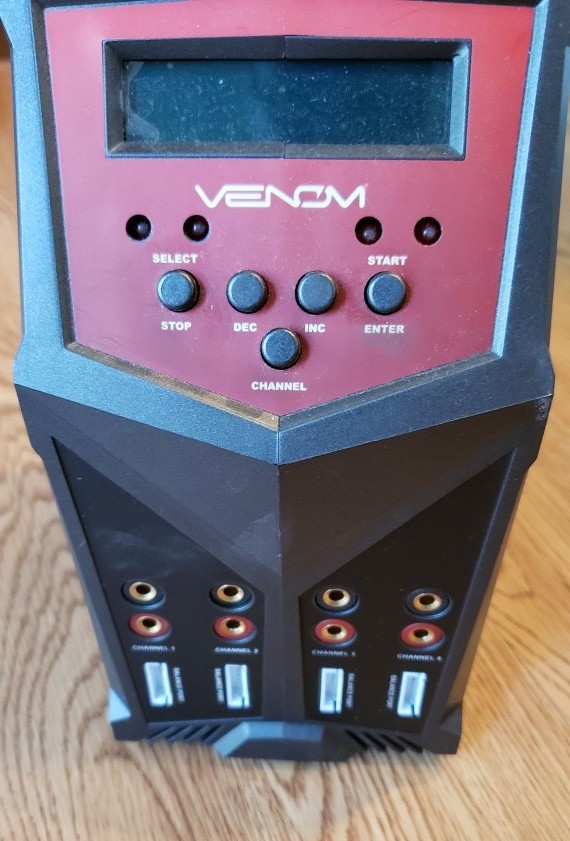 If you need to charge multiple batteries at the same time, the Venom Pro Quad 100W charger is probably the best bet. Priced around $200, it has all the capabilities of the 2-4 40w, but with four independent 100W charge ports.

This means you can charge up to four batteries at one time! The Venom Pro Quad 100W is the way to go, with four 100W charge ports that can charge up to 7 amps. In fact, I use the 100W version as my go-to charger for all my needs.

If you have large capacity batteries, large cell counts, or higher charging rates, you may want to find a charger that operates on higher wattages. As mentioned, the Venom 40w AC/DC charger works on 40 watts. Each port on the Venom Pro quad charger is 100W,

What does this mean to you? Well, let’s look at how watts, amps, and voltage all work together.

Electrical circuits can be connected in many ways, Most commonly in series and parallel.

Parallel charging can be Very Dangerous. Even experts from well-known battery manufacturers “consider parallel pack charging to be highly dangerous and should not be attempted even by experienced users”. The problem with parallel charging or even using your batteries in parallel is, when hooking up batteries in parallel, you are doubling the capacity of the batteries and maintaining the voltage of one of the individual batteries. What this means is that your charger, which normally monitors the battery while charging to prevent overcharging, It cannot see all of the individual batteries’ voltages – it can only see one battery.

Another problem with parallel charging is the inequality of the batteries. If the two batteries and the cells contained were from the exact same production lot, had the exact same chemical composition and age and charge history and everything else, in other words, if they were completely identical parallel charging would be okay. But a consumer will never be able to replicate those conditions, or even come close. The more those parameters differ and considering the questionable balance charging techniques that many battery chargers use, the higher the chance of overcharging and thermal runaway.

But what about batteries that are built in parallel? Doesn’t the fact that batteries are sometimes constructed in parallel mean that parallel charging is safe?

“It” is very unlikely, however, if you can match all those parameters to be identical, parallel charging is okay. At the factory where they make the packs, manufacturers are constantly monitoring and testing the materials that make up the cells. Each cell is labeled with a UPC code that contains the entire chemical makeup and history for that cell.

When a manufacturer assembles a battery, a computer scans and sorts the cells into compatible matches. Only then is it safe to parallel charge these cells? However, when you charge a LiPo battery at home, even if it is already constructed in parallel, you don’t need any fancy parallel charging boards, the work is already done for you. All you need to do is charge it as you would a normal battery.

Never use parallel charging cords. There is no safe way to use these. Don’t tempt fate! Parallel charging simply is Not Safe! You will be able to find thousands of successful attempts to parallel charge batteries around the web. These are the people that just got lucky and have not yet managed to burn their home down. Every battery expert I have talked to agrees on this.

Series charging is the safer method of charging, meaning it is no less dangerous than straight-up normal charging If you set up your charger the right way. The act of balance charging LiPo’s is essentially making the charger individually charge each cell, making sure they are all kept at safe levels. Now, If you only have a single-port charger, series charging is the only safe way to charge multiple batteries at the same time, but wiring them up properly is pretty complex and not something a beginner should attempt.

And the absolute best way to charge multiple batteries at the same time is to have a multi-port charger as the Venom Pro Quad mentioned above. If you find yourself needing to charge many batteries at once, do the smart thing and purchase a charger or chargers that will fit your needs.

What are your thoughts and opinions? Leave me a comment below.