Nitro RC Engines can get stuck or completely seize up. It can be difficult to determine if the nitro engine is stuck or seized when trying to spin it over. When it gets stuck, it appears that it is seized up and may not move at all, leaving you to believe it is seized. The truth is that Nitro engines will become stuck if they are Not properly cared for.

Why Nitro Engines Seize Up? 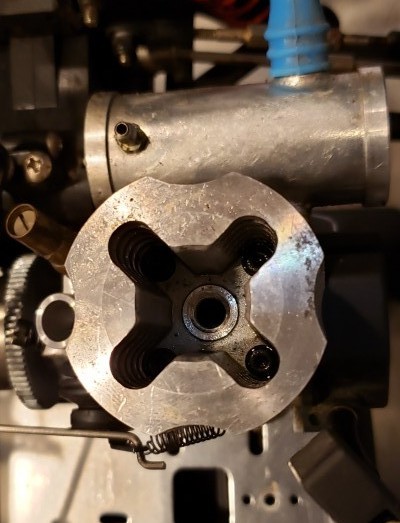 Nitro RC Engines can seize up or become stuck for different reasons. They may hydro lock, pull-start cord jammed, debris, or it has been sitting a long time, these are all reasons nitro Engines can get stuck/set-up.

Hydro lock – If there is too much fuel in the combustion chamber and you keep trying to start the engine, it will flood to the point where it feels seized or jammed. To correct this condition, carefully remove the glow plug and see if the engine will turn over. If it does, then keep turning it over to blow the excess fuel out of the cylinder, then reinstall flow plug and should be ready to start.

Pull-start jammed – the pull cord may have come off the track and jammed. To correct this you need to remove the pull-start assembly carefully. Remove the screws and slightly slide the assembly away from the engine, just enough to get a small precision flathead screwdriver in there. Hold the assembly with one hand and use the screwdriver as a lever and slowly slide it off, pushing it from the center using the screwdriver. This is to keep the spring from popping out of place.

Debris – A stone or other debris may have lodged in the flywheel, making it lock up. Check around the flywheel real good for any debris and remove any that are found. This is common when driving off-road constantly.

Free Up A Seized Nitro Engine 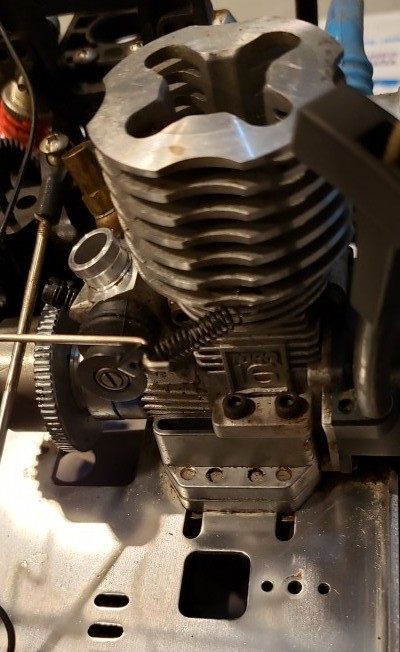 If your nitro engine is completely seized and will not turn at all, there is some hope. You have a 50-50 chance that it can be saved. Nitro engines can lock up due to the piston being in the top position when shut off and allowed to cool.

After running a nitro engine, You want to make sure the piston is a bdc position before the motor cools down. The top of the cylinder is tapered and the old fuel left inside can become sticky. This causes the piston to stick to the cylinder sleeve, acting like a seized engine.

Remove the glow plug and see if the piston is up close to the top of the cylinder. Try to turn it over with the glow plug removed. If it still does not move, then remove the pull-start assembly (if equipped) and use a wrench on the crank nut to try to turn the engine over.

DO NOT use too much force or things will break. Using the wrench, if it still won’t turn, then try to use a heat gun and heat up the cylinder (sleeve area) to about 200 degrees and then, with the wrench turn engine over. It should now spin over freely. Once it turns overuse a few drops of after run oil in the glow plug hole and turn it over a few times to let the oil work in and coat the inside of the piston sleeve. You now should be able to put it back together and see if it will run.

After performing the above method, And the engine still does not turn over, you can remove the head and try to use the heat method again on top of the piston and the sides of the cylinder. Remember you want it to reach 200 degrees.

If nothing else works, you can try some good old ATF. Open the carburetor and put some ATF into the crankcase. This will help to loosen the crankshaft in case the crank is locked. Let it sit for 24hrs and then see if it will turn.

When all else fails, you may want to think of getting a new engine.

I hope you found this article to be helpful! As always you can leave a comment below!

9 thoughts on “How To Free A Seized Nitro Engine”