Ever think of converting your ordinary completely stock Traxxas Slash 2WD into an aggressive Monster Slash? I  bet you have! In this article I am going to show you just that! We’ll review what parts I used and share everything you need to know to convert a new or old Slash 2WD XL-5 or VXL into the mighty Monster Slash.

Once you have all the parts needed, it is time to do some converting! 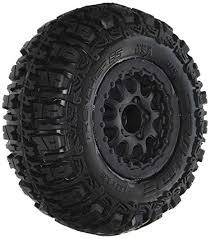 Now This step is pretty easy and self explanatory. Remove all four nuts that are holding on the wheels with a 7mm nut driver. Remove the stock tires/wheels and put on the new 2.8″ Trenchers wheels & tires. 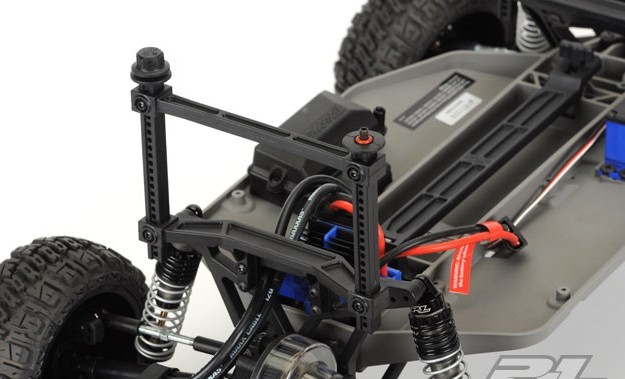 Now that I have the large 2.8″ tires on, I am going to need to lift the body for more tire clearance. Remove the Pro-Line Extended Body Mount Set and start assembling them. Don’t worry on setting the height correctly, we’ll adjust that last once the mounts are installed. You will need a 2mm hex driver.

To mount the front, gently pull the front shock tower towards the front of the vehicle, slightly flexing the plastic enough to get your 2mm hex driver in there. Remove the two screws holding the stock mount, and reinstall the Pro-Line mount using the same two screws, in the same two locations.

To mount the rear, remove the four screws used to secure the stock mount to the rear shock tower. Now use those same four screws and install the Pro-Line Extended Body Mount in the same location.

Once the Pro-Line Extended Body Mounts are installed on the vehicle, install the body and inspect it’s fit. Raise and lower the body mounts until you reach the desired height you want.

For my conversion, I found best results with the front posts mounted as high as possible, and the rear with five holes showing between the crossbraces.

Note: Despite the extended body mounts, our vehicle required some body trimming around the front and rear wheel well area. Please inspect your model for rubbing, and if necessary, use Lexan scissors to trim away these spots. 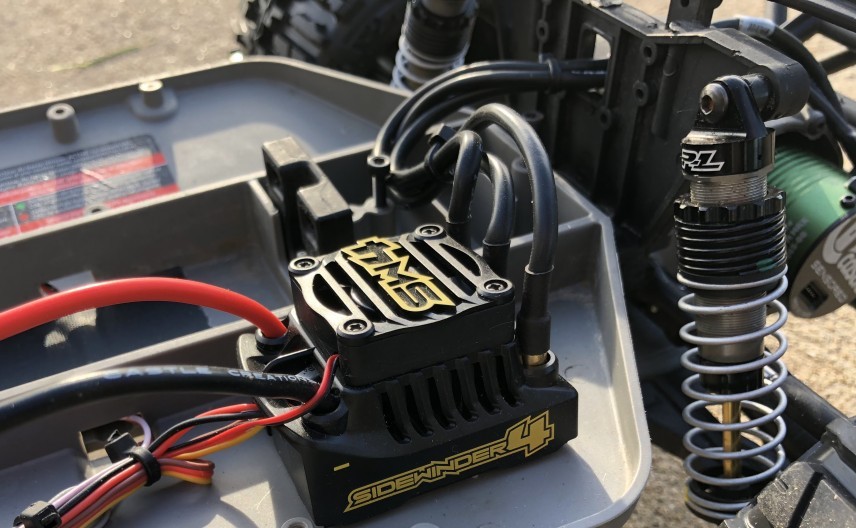 The old Motor and ESC must be removed Before the new Castle ESC & Motor combo can be installed. Disassembly is very straight forward and painless. First, Unplug the motor and ESC leads. Open up the receiver box with a 2mm hex driver and unplug the ESC receiver lead from channel 2 on the receiver. Be careful not to lose or damage the large waterproof rubber seal that fits under the receiver box lid, you’ll need it later when reassembling. Use the 2mm hex driver again and remove the two screws that secure the Traxxas ESC to the chassis. The ESC should now be free to remove.

Now that you have the speed control removed from the vehicle, remove the two screws holding on the gear cover. With the gear cover removed, you have access to the motor and the two screws securing it to the vehicle. Remove those screws and remove the motor and carefully route the wires through the shock tower. Keep track of the screws, you’ll use them later for re-assembly.

This Monster Slash conversion uses larger diameter tires and upgraded Motor/ESC combo, So I highly recommend checking the temperatures of the motor and the ESC the first time you take the truck out. If the temp is too high, Be sure to change to a smaller pinion gear. I use Duratrax Flashpoint temp gun.

The Castle Sidewinder SCT speed control doesn’t have the same mounting tabs as the original Traxxas ESC. Instead, to easily secure the Castle ESC to the chassis, use some double sided sticky tape. I used Apex R/C Products Double Sided foam servo Tape (3015) because it’s thick and vibration absorbent, which greatly helps handle the hard hits while staying secured to the chassis.

Now that the Castle Creations ESC and Motor are installed, you need an ESC connector. When brand new, the Castle Sidewinder SCT does not include a pre-installed connector, so one needs to be soldered on. For this build, I used a ProTek R/C Male T-Style Plug PTK-5013.

The last step: Calibrate the Castle Sidewinder SCT before you go out and drive. The Castle calibration is a walk in the park, just follow the included quick step guide.

When everything is complete, add a fully charged battery and put on the body and go have fun with your new monster slash!

2 thoughts on “How To Build A Monster Slash”