After my Rustler 4×4 broke, I decided to write an article on how to perform a Traxxas Rustler Suspension Upgrade. Running my Rustler in about 2″ of snow we had, hitting my jumps and racing around the backyard. I cut the corner too tight and smacked into a tree with the right front tire with a loud thud. That was it for the day! The Rustler 4×4 was broken. Broke the A-arm, toe link and the steering linkage.

RPM was used for my Traxxas Rustler Upgrade Parts. This Upgrade replaces all front and rear suspension arms with new RPM arms. This will add to the durability of the Rustler. RPM parts are offered in a variety of colors that you can choose from. I am using the blue RPM arms for my Rustler. 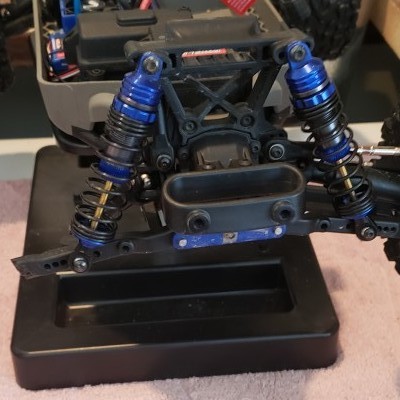 I am going to start with the front arms because that’s where it broke, so I’m going to change them first. This is an easy repair to perform. Let’s get it!

The first thing to do is, remove the front wheels and set them aside.

Next, take the 5 screws out of the front bumper. There are 2 through the front and 3 on the bottom side, set that aside with the screws.

Now, you need to remove the screw/pin holding the A-arm to the steering knuckle, and the lower shock screw holding the shock to the A-arm.

Then, remove the screw in the center of the suspension pin holder and pull outward to remove. Once the metal holder is out you can now pull the pin holding the A-arm out, you may need to use a pair of needle nose pliers. The A-arm is now free to pull off the truck.

The procedure is the same for both sides.

Installing the front arms is the same as removing just in reverse order. Let’s go through it together.

Slide the new suspension arm in to place on the chassis and re-install the pin removed earlier.

Reattach the shock to the arm and then fasten the steering knuckle to the arm.

Position the suspension pin holder back in place and faster with the center screw. Now reinstall the front bumper with the 5 screws originally removed. 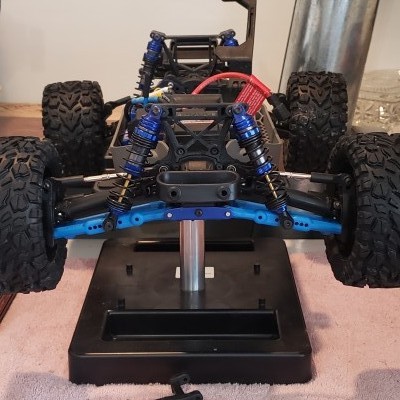 Note: If you are replacing both A-arms then do not reinstall the front bumper and center suspension pin holder until you have installed both A-arms.

The rear A-arms are very much like the front.

Remove the rear tires. Then, remove the 3 screws holding the rear bumper and set the bumper aside.

Now,  remove the screw on the center pin holder plate and pull the plate out. Again, you may need to use the pliers to pull the suspension pin out. Once the pin is out, pull the A-arm off.

Perform the same steps for the other side.

Set the new arm in place on the chassis and slide the pin back in.

Reattach the lower shock to the arm and then the arm to the axle hub.

After both arms have been replaced, Put the holding plate back on over the pins and fasten with the screw. Next, Set the bumper back in place and install the 3 screws. 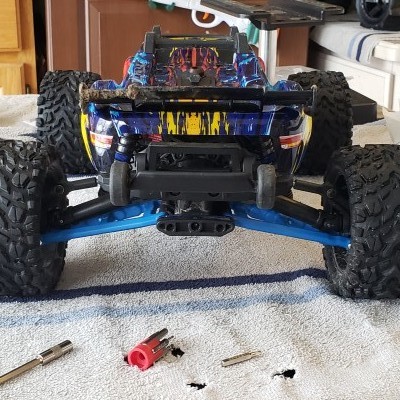 That is all there is to the Traxxas Rustler Suspension Upgrade. Now that you got your A-arms replaced, the Rustler is ready for some bashing. Go ahead, have some fun!

Upgrading to RPM not only adds some durability to your rig, but it allows you to have a customized look as well. With the colors offered you can choose a color scheme to match your vehicle or your style. 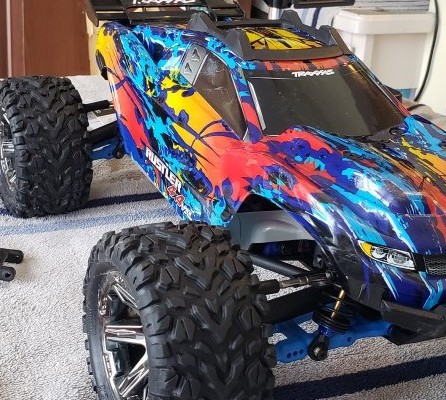