The 1/6 scale Losi Super Baja Rey RC truck is that special place between 1/8 scale and 1/5 scale, where you get a vehicle that is more stable than a 1/8 scale and it is still able to use standard batteries and reasonable power systems, unlike the larger 1/5-scale vehicles. Losi has taken this new scale and upgraded the ever-popular Baja Rey into a much larger vehicle.

This introduced The Super Baja Rey. The big basher is 40 percent larger than the 1/10-scale model, and has received a significant power boost to keep up with its new dimensions and added weight. Even with a curb weight of more than 20 pounds, the Super Baja Rey will top 50mph. Want to learn more? Read on as I give you, the Losi Super Baja Rey Review.

Right out of the box we could only find one potential issue with our vehicle. The rear shocks were not adjusted evenly, so the rear of the truck sat unevenly. We checked them over good and the shocks stroked up and down smoothly without being over, or under, filled.

We then adjusted the shocks properly and now is all set. The wheel nuts were tight, the pinion/spur mesh was perfect. 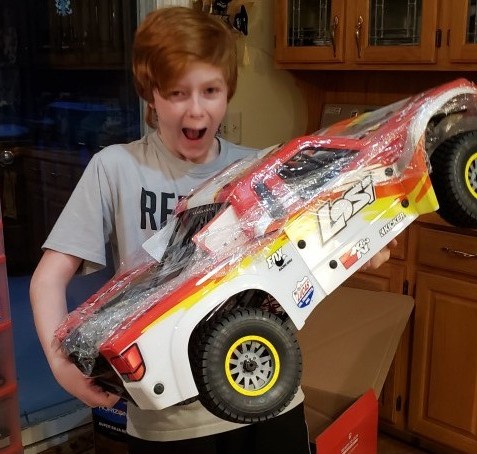 In the last few years, We’ve been seeing vehicles get bigger and more scale looking. The Losi Super Baja Rey is not only a big 1/6 scale, but it is also designed to look exactly like a full-sized short course race truck.

The Super Baja Rey also sports serious power thanks to a large Dynamite brushless power system. Then, when you throw in its high tech Spektrum AVC electronic stability system, it has all the makings of a serious bash machine.

Just like its smaller counterpart, the Super Baja Rey uses Four separate pieces of molded Lexan to make up the body, and the body pieces are attached to the roll cage with 16 screws and plastic washers.

The body comes already painted for your convenience, and you can choose either a black-green-and-white or a red-yellow-and-white trim scheme when you buy it.

Inside the cab of the truck is, a scale molded Lexan interior with two driver figures giving it a more scale look. 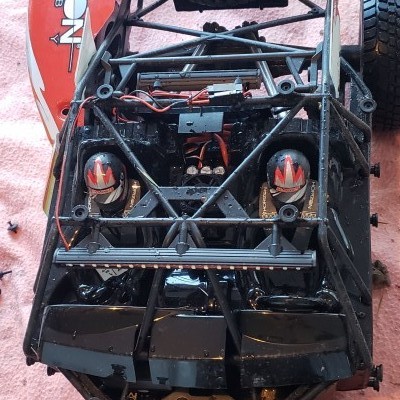 Then Losi topped it off by, Adding to the scale realism a pair of bright LED light bars, one in front and a smaller one in the rear.

One thing that makes a full-size trophy truck so special is the tubular roll cage that is installed between the body and chassis of the vehicle.

The folks at Losi could have cut corners a little and made some tubular pieces that would bolt to the body to give the truck the appearance of having a full cage, instead they went all out and gave the Super Baja Rey a complete tubular roll cage and it makes the truck look as good or better when the body is removed.

Several pieces of “tubing” are held together with screws and once together they form a solid structure, which adds to the durability of this truck. 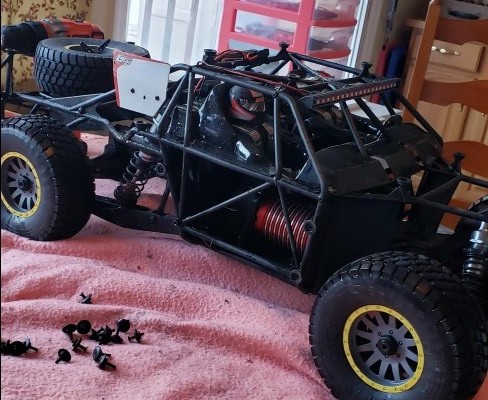 The front end of the Super Baja Rey features an independent suspension, that uses upper and lower A-arms similar in shape to the ones that you see on full-size trucks. The hubs are also quite similar.

No adjustment for camber has been built into the front suspension for fine-tuning, and the steering links are “adjustable” but only allow you to increase toe-in. The front end also has a sway bar to help keep the chassis flat and stable.

Large 20mm-diameter shocks are used to control dampening, they feature threaded aluminum bodies, which make for quick and precise ride-height adjustments. The shock pistons are held in place by small lock nuts and dual O-rings are used to seal the bodies.

Bump stops are also included, to help soften the blow between the spring retainers and shock body when the shock is fully compressed by hard landings. 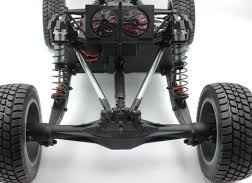 Just like a real trophy truck, the Super Baja Rey uses a 4-link rear suspension to absorb bumps and jumps. The upper links are made out of the aluminum rod, while the lower links are injection-molded pieces. You can run the rear shock in one of two positions.

You also have the option to buy more shocks and run two shocks on each lower link, for a total of 4 shocks for an impressive rough terrain absorption.

An inboard mounted sway bar helps keep the chassis flat in the turns, but more importantly, it reduces torque twist when power is applied for a more stable handling truck.

The Super Baja Rey comes with Spektrum’s DX2E Active radio, and it has a little more to offer than other RTR radios. Out of the box, you can adjust AVC and travel, and limit the throttle with the three-position switch, low, medium and high, on top of the radio.

The functions of the DX2E Active radio are expandable by adding Spektrum’s optional speedometer or the Bluetooth module and phone mount. The speedometer will show you the top speed of your vehicle on an easy-to-read LED display, which mounts to the top of the radio.

Using a Bluetooth module and phone mount lets you use the Spektrum Dashboard app, which also shows you top speed and adds motor temp, battery voltage, and more.

Getting the roll cage off the chassis is a little time-consuming because the body sits over top and is held on with 16 screws and the roll cage is held in place by 12 screws. So, Losi designed the Super Baja Rey to have an easy-access rear-loading battery box.

It accepts two 3S LiPo batteries or two 2S LiPo batteries, and they lie flat and stack on top of each other. A foam spacer on the battery door keeps the packs from moving front to back in the tray, and a foam spacer is included to take up some top gap when 2S packs are used.

You can use a single 4S pack, but if you do you’ll have to make a jumper plug that goes into one of the open plugs in the chassis to complete the circuit. 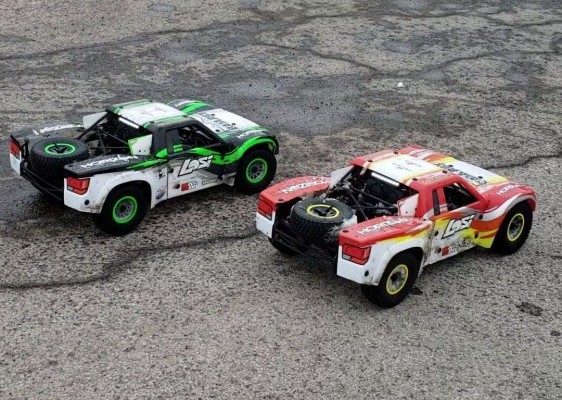 One of my favorite features of the Super Baja Rey is the rear-loading battery tray. The cage doesn’t pivot or come off easily for battery installation, so the rear-loading tray makes it easier to get the batteries in and out.

The only issue I saw was that the foam spacer on the battery door interferes with the batteries, making getting them in a little of a pain.

The truck’s top speed is impressive, I could handle the truck pretty well at top speed. We drove this truck on the hard frozen packed ground and I was surprised at how well the stock tires performed on that surface after seeing how easily they slid and spun on the pavement.

How well does the Super Baja Rey turn? It is much like it’s smaller 1/10th scale version. The Super Baja has a lot of weight over the front end and this helps keep the front tires glued to the ground while cornering.

The rear end tended to feel a bit loose which helped for rotation in tight 180s but worked against it in fast sweepers. Overall, the Super Baja Rey cornered in a very scale manner. 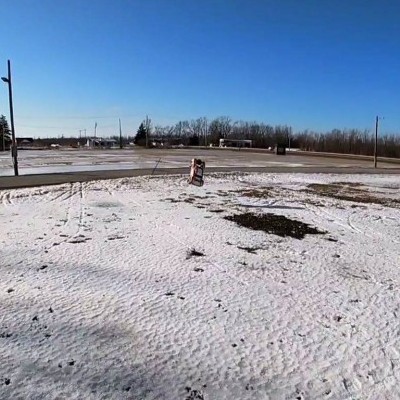 When you hit a jump with this truck, the rear end sometimes kicks and sends the rear end up in the air. It’s not ideal, but the truck powers through it when it happens.

With a small change in driving style, the kick can be reduced. Yes, it still tends to kick slightly, but not bad enough to be of any major concern.

We were able to get in some airtime with the Super Baja Rey and we thought it was an outstanding jumper, mostly thanks to its large size, and its suspension did an outstanding job of soaking up the landings.

With the time of year here (winter) we did not get any amount of time grass driving. The grass we were able to drive on, was frozen. However, we did find out what we needed to.

The giant tires and big brushless power system did a great job of throwing a giant grass rooster tail and snow as well. If your primary bash area is grass, you are gonna love the Super Baja Rey. 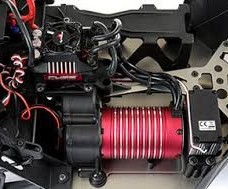 The stock brushless power system does a great job at powering this truck, but we found we liked it a lot more on 6S than on 4. On 4S the truck had decent power through the bottom and mid-range, but really left something to be desired up top.

Swapping over to 6S really brings the Super Baja Rey to life. It instantly had a much harder kick right off the bottom and ran like a cheetah up top. Unlike some vehicles, the Super Baja Rey isn’t overgeared on 6S, meaning that temps were in a normal range where it could easily be driven for an extended period.

Overall, the Losi is a huge and heavy truck, but it comes with more than enough power to make it feel fast.

We were hard on the Losi, but that was because we wanted to know where and if we could hit its limit. Why is that? Well, we were doing all kinds of stupid stuff to it and it would not break. However, because what we do is bash our cars and trucks hard to know how they will hold up.

I must say, I am impressed thus far. After spending two days bashing these trucks in the cold temperature, We only managed to bang up the bodies and tear the rear fenders.

Other than that, The spur gear slid down the motor shaft on the one truck so it quit moving.

Have a look at the video below, you can see us jump, crash and drive on ice, as well as push the truck with the other one to get it back and have a look at what happened.

I’m a huge fan of the 1/10-scale Baja Rey, and the new 1/6-scale version is even bigger fun literally and more exciting. Its much larger structure increases its stability and handling. 6S power makes this truck very fast, especially for its size, and the throttle-limit switch is a great way to slow down the truck in loose conditions.

But even in the low position or “slowed down,” the Super Baja Rey is a fast and serious machine, so heads up if you’re letting a beginner take a spin. Electric power is great, but what be fantastic is, if Losi was working on fuel power for this truck to make the experience even more realistic.