Have you ever wanted to try FPV RC Cars? Are you afraid to try on an aircraft thinking you’ll fall from the sky and destroy your drone? Did you know you can put an FPV system on your RC car or Truck? Well, it can and has been done. With the first-person view getting more popular over the last couple of years, we are finding more ways and uses for FPV systems. FPV RC Cars are getting more popular as well.

There are so many different camera systems out there, ”I” want to share with you some of the types of FPV systems available and how I installed my own FPV system.

What is an FPV system? Let’s break it down. First Person View is a video camera system that operates on 5.8ghz frequency. An FPV system consists of an FPV camera, a transmitter and a receiver. These systems let you view the camera video through the use of a monitor or video goggles. The most popular for RC Cars and drones use is using with the googles. This lets you see only what the RC Car sees as if you were in the RC Car your self.

There are many different cameras and googles out there. That makes it a little difficult to pick the right one, and how you are going to use it also. To get an Fpv system to use in an RC car you want to be sure you get an AIO (all in one) camera. The AIO cameras have the transmitter built into it, so there is no need for a separate transmitter. This gives you fewer pieces to install onto your RC Vehicle. Here is a list of Some of these cameras and goggles that are available.

This is just a list of some cameras and Google’s that I have used. There are many many then just these to choose from. 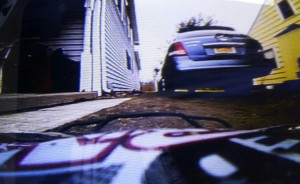 I have always been interested in the DRL (drone racing league) and I have flown my drones with for. “I” have wreaked a few drones also. That is why I put FPV on my Traxxas slash, so I could learn to use for without totally destroying any more drones or equipment.

So I wanted to set up my slash to use FPV and I didn’t want to mount a camera to the top of my car. “I” wanted to mount it so I would see as if I was in the driver seat looking out the windshield. Knowing that there was no direct bolt on FPV system for my RC cars and knew I have to design my own. At this point, I started looking around at my RC and all the extra spare parts I had to lay around. Found something I could make and get to work to mount my camera.

here is what parts and or pieces I used for my FPV system.

The body and the camera we’re the only two parts I needed to purchase. The rest of it I had laying around from old RC cars I used to have. “I” am sure there is better ways and nicer looking ways to do this, but I didn’t want to buy a bunch of parts to do it and I did not want to wait. 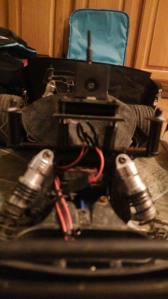 The Eachine camera comes with a foam block, used for packing. “I” put the camera inside the foam block to help absorb the bumps and provide a smoother video with fewer jitters. Then Measured the width of the camera foam block and took the skid plate and cut 2 pieces out of it. Both pieces were cut 2 inches wider than the camera.

Put the two pieces together and drilled 4 holes, one in each corner. At this point, I super glued the bottom of the camera foam block and stuck it to the center of one of the pieces that I just cut. “I” then set it aside to dry while I put together the rest of my mount. Then I took off the front body mount and drilled 2 holes in it. The holes I drilled we’re about 1 inch out from the center each side.

So I completed the FPV mount that I can put on and take off with just two screws and one plug. “I” put the body mount/camera mount back on and Measured from the post that the body clips to the edge of the camera. Did this on both sides and then cut a hole in the body for the camera to fit through. Took the body and set it on to make sure the camera fits through and the body sits right.

Well, now I got that all set and good to go, It’s time to wire the electrical connector. I used a JST connector so I could plug it into an on/off switch. The on/off switch plugs into the receiver and the other end my camera. Not it’s time to go test it out.

Ok, now I have made my mount and installed my FPV system on to my Traxxas Slash RC Truck. Running this RC with FPV is quite awesome. “I” sit on the tailgate of my pick up truck, put on my Google’s and let the slash rip. Mainly I just run it through the yard or in big empty parking lots with FPV. It really feels like I am in the RC car, which makes it really fun and cool. “I” would recommend putting FPV on an RC vehicle to anyone that has ever thought about or wanted to try it.

Thanks for reading my article. If you have any questions please feel free to ask, I would love to hear your thoughts or opinions on this topic, leave me a comment and I will reply shortly.