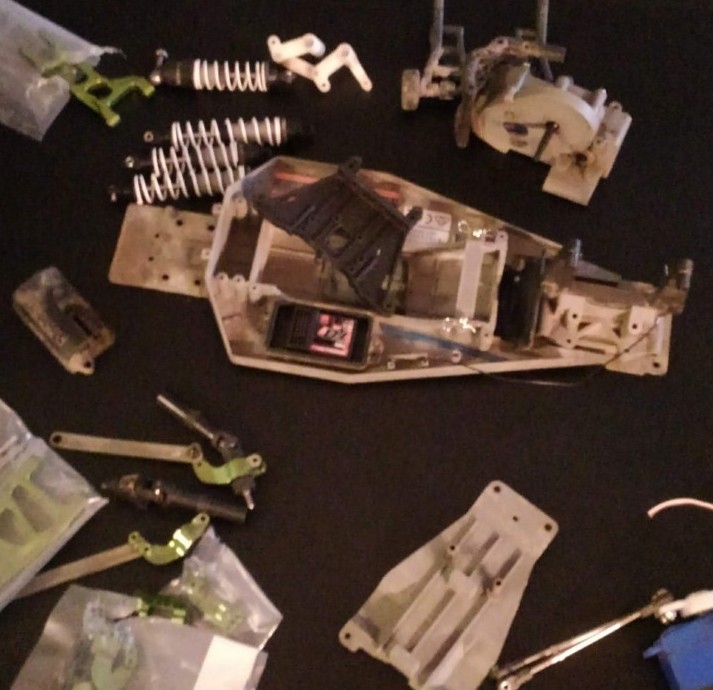 The idea to build a Rustler came to me because I have owned several Rustlers I the past and I really like the Traxxas Rustler. Unfortunately, all my Rustlers have been broken and in pieces for a long time. They were used for all types of driving, street, off-road dirt track and off-road jumping.

These cars were just bashed hard. This time I thought I would take all the parts I have here and try to build a complete Rustler, without buying anything. This Rustler will be for high-speed street running only.

OK, So I gathered all my parts and started building my Rustler. Using the stock Rustler chassis, Traxxas VXL velineon power system, Traxxas Slash gearbox with all metal gears, Slipper clutch off Traxxas Bandit, RPM A-arms (fronts were off the Rustler and the Rears were off a Stampede), MIP axles off Traxxas Slash and Street wheels and tires from the Slash, The body, body mounts and shock towers from the Rustler. 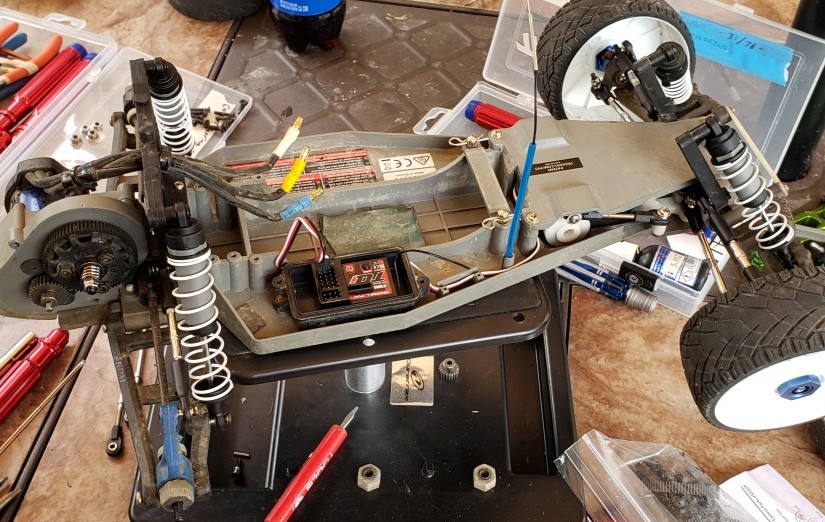 Once I got my Rustler built and all together, I grabbed my 2s 5200mah 50C lipo and transmitter to go out and test it. Turned it on and got about 10 feet when all of a sudden, the car just stopped. It would not respond at all, throttle or steering would not do anything. As I walked up to the car, it suddenly took off full speed ahead and stopped again about 15 feet ahead.

This time I ran up to grab it before it could take off again. I shut it off and decided to change all the batteries, even though I knew they were all good! I put new batteries in the transmitter and another 2s lipo in the car.

Time to test it again! Yet again I got about ten feet and it stopped for a second then took off for a second before it just stopped completely. Well at this point I knew my receiver was shot and needs to be replaced.

Unfortunately, I do not have another receiver, so I will have to buy one.

I finally got the chance to get my new receiver. I swapped out the receiver and bind it to my transmitter, now it’s time to go test it again. I grabbed my battery and transmitter and out I went.

This time the car runs and drives good, no more quitting a few feet away! Driving it around until the battery drains down and the low voltage system kicked on. That was great, I got a full battery worth of running with no issues. Well, there is one issue, the car is too slow. 30mph. I know I can do better than that.

Changes To The Rustler

OK, I know I have to change the gearing to make it faster. Hey, I found a 31 tooth pinion and a 76 tooth spur gear. I swapped out the gears and gave it another go. This time I got to 44 mph. Now I know something is not right. The car should be running in the 50s.

After looking the car over, I did find that the bearing on two of the wheels was bad. When I spun the wheels I could feel they were rough and tight, so I replaced them with new ones I had.

On the next test run, the car was running 52 mph. Better, however still not enough. I decided to put in a 3s 50c 5200mah lipo. With the 3s we are now running 65 mph, But I can not get more than 3/4 throttle otherwise the car lifts off the road and takes off like an airplane.

Need Little More Out Of The Rustler

This final test runs the car hit 68 mph. The weight I added has helped, although still no full throttle. I can get about 7/8 throttle before lifts off the road. This is some decent speed out of spare parts build. I am pretty happy with it, For now anyways. “Although”, I think I can get 70 out of it.

I had to install some lights on it. The other night I was running just as it was starting to get dark and I ended up losing sight of the car. When I ran over to where I last saw it, I found it in the ditch alongside the highway.

I then changed out the stock Rustler front bumper for an RPM bumper and mounted the RPM bumper upside down. This way it sticks straight out front, instead of pointing upwards. Hoping this will decrease wind drag.

“It” is now time to go back out for the final test. This test run, I did, in fact, hit 70 mph! The bad part is, I still am not able to get to full throttle till just before my let-off point. Due to running out of the road. At this point, I am not sure if I can get over 70 mph or not. Guess I will be looking for a new stretch of road for test runs.

The Traxxas Rustler is running great and is fast. This car is set up for street use only, so it seems a little weird not being able to go off-road with it. All my other Rustlers were bashed off-road pretty hard. So this is a little different but I can get used to it. Here is a photo of the GPS hitting 70 mph max speed.

If you have thought of getting a Traxxas Rustler, I would recommend going ahead and get it. It really is a great car. It just lacks in the off-road bashing area.

For more information on the Traxxas Rustler click here.

Leave your thoughts and comments below.